Statement of the Republican People’s Party Leader Kemal Kılıçdaroğlu to the press: “Keep at Home” 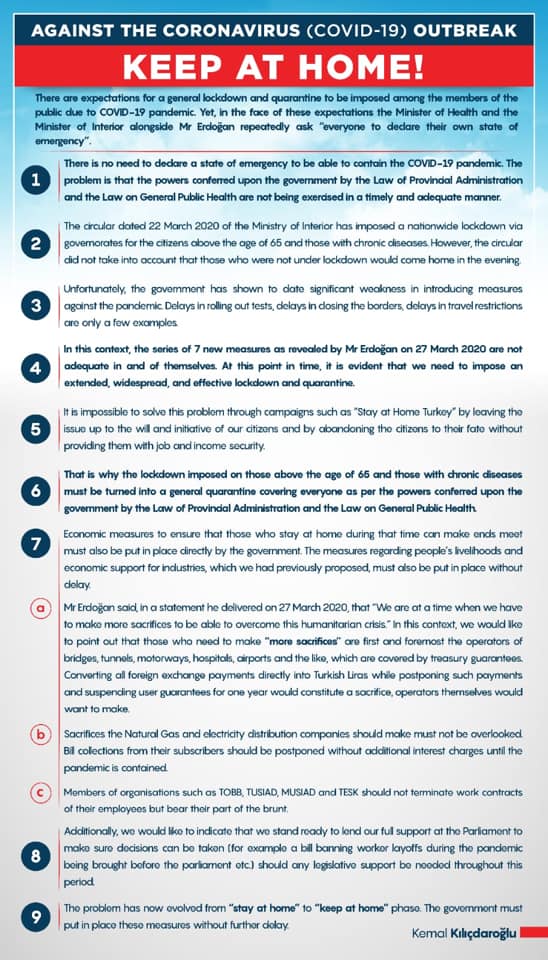 There are expectations for a general lockdown and quarantine to be imposed among the members of the public due to COVID-19 pandemic. Yet, in the face of these expectations the Minister of Health and the Minister of Interior alongside Mr Erdoğan repeatedly ask “everyone to declare their own state of emergency”.

1- There is no need to declare a state of emergency to be able to contain the COVID-19 pandemic. The problem is that the powers conferred upon the government by the Law of Provincial Administration and the Law on General Public Health are not being exercised in a timely and adequate manner.

2- The circular dated 22 March 2020 of the Ministry of Interior has imposed a nationwide lockdown via governorates for the citizens above the age of 65 and those with chronic diseases. However, the circular did not take into account that those who were not under lockdown would come home in the evening.

3- Unfortunately, the government has shown to date significant weakness in introducing measures against the pandemic. Delays in rolling out tests, delays in closing the borders, delays in travel restrictions are only a few examples.

4- In this context, the series of 7 new measures as revealed by Mr Erdoğan on 27 March 2020 are not adequate in and of themselves. At this point in time, it is evident that we need to impose an extended, widespread, and effective lockdown and quarantine.

5- It is impossible to solve this problem through campaigns such as “Stay at Home Turkey” by leaving the issue up to the will and initiative of our citizens and by abandoning the citizens to their fate without providing them with job and income security.

6- That is why the lockdown imposed on those above the age of 65 and those with chronic diseases must be turned into a general quarantine covering everyone as per the powers conferred upon the government by the Law of Provincial Administration and the Law on General Public Health.

a) Mr Erdoğan said, in a statement, he delivered on 27 March 2020, that “We are at a time when we have to make more sacrifices to be able to overcome this humanitarian crisis.” In this context, we would like to point out that those who need to make “more sacrifices” are first and foremost the operators of bridges, tunnels, motorways, hospitals, airports and the like, which are covered by treasury guarantees. Converting all foreign exchange payments directly into Turkish Liras while postponing such payments and suspending user guarantees for one year would constitute a sacrifice, operators themselves would want to make.
b) Sacrifices the Natural Gas and electricity distribution companies should make must not be overlooked. Bill collections from their subscribers should be postponed without additional interest charges until the pandemic is contained.
c) Members of organisations such as TOBB, TUSIAD, MUSIAD and TESK should not terminate work contracts of their employees but bear their part of the brunt.

8- Additionally, we would like to indicate that we stand ready to lend our full support at the Parliament to make sure decisions can be taken (for example a bill banning worker layoffs during the pandemic being brought before the parliament etc.) should any legislative support be needed throughout this period.

9- The problem has now evolved from “stay at home” to “keep at home” phase. The government must put in place these measures without further delay.